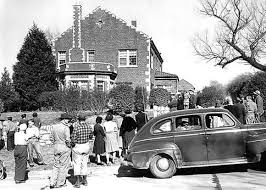 Tulsa is one of the bigger cities in our great state, so of course it has it’s fair share of haunted attractions; However, the most popular of these haunts is by far The Hex House.

Before being torn down and made into an attraction in 1975, the house belonged to a 45 year old woman by the name of Carolann Smith. In the state of Oklahoma, Smith had lived under many names, claimed insurance on them, and claimed she had a small child named “Bonnie.”

It was only after investigators talked to the local school teacher that they learned there was no such child, in fact, students said that while she had no children, she did indeed have a small dog named BonBon.

In 1944, an investigation led by police discovered a rather small coffin buried in Smith’s backyard, and two women living in the basement.  Virginia Evans and Willetta Horner had been under hypnotic and occultic control, or a “Hex” as the locals called it, for over seven years. They were barely fed and beaten under the guise of “religious purification.”

Smith let them out of the home, where they slept on orange crates with nothing in the way of warmth during the winter months. The women even their captor their paychecks after being promised great rewards. Evans and Horner testified against Smith, claiming their kidnapper practically raised them, and that, “She always quoted religious scripture that fitted perfectly with what she wanted us to do.”

Smith was convicted of suborning perjury and sentenced to one year in prison. She was also put on probation for making false claims to obtain ration books; There were many books and articles pertaining to “Doomsday prepping” found in her home.  She fled the state shortly after her release.