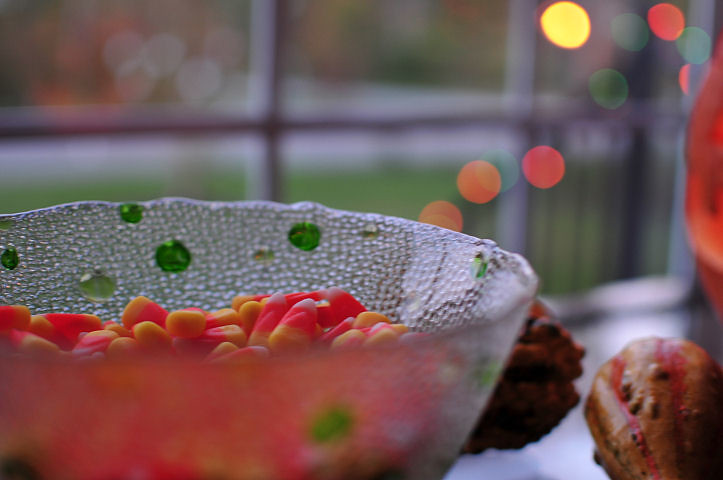 Love it or hate it, candy corn makes its way to supermarket shelves each October. Staff members Monica Guarjado and Devin Ryan stand on opposing sides of the candy corn conundrum. Read their arguments and tell us below, is candy corn the ultimate Halloween treat or just another scary trick?

There are so many reasons to love candy corn. When you think of Halloween, various images may come to mind– witches, vampires, pumpkins and of course, Candy Corn! The image of the vibrant yellow, orange and white is a staple of Halloween.

Candy corn has been around for 100 years. It’s original name was “Chicken Feed.” George Renninger is the mastermind behind it all and was the first to produce them. As of right now, the Jelly Belly Candy Company produces the candy today. There is of course the regular flavor and regular color but there has been variations for Valentine’s Day and Christmas with coordinating colors. These candies can be enjoyed at any time of the year!

The uniqueness with the colors, flavor and shape of the candy corn sets them apart. Some dislike the “waxy” texture of the candy so naturally they prefer maybe a Twix bar instead. Candy corn has significantly less sugar per serving than a Twix bar (or any candy.) Also, can you name another candy that you can stack to look like corn? Nope, that’s only candy corn. If you stack them in a circular pattern they will begin to resemble a corn on the cob, which is the coolest thing ever.

Annually, there are 9 billion pieces of candy corn produced per year. Obviously, people are eating them because they’re amazing. Their shelf life is 8-9 months as well which means you can stock up on them and eat them for a while (or all at once.)

In my house, we always stock up on candy corn. I’ve even done a few crochet projects, I did a pillow and I’m working on a blanket that alternates the normal colors of the candy. Candy corn has the perfect flavor, texture and color. They’re the little blessings of Halloween.

Halloween is a tradition celebrated around the world, and one of the biggest things about this spooky holiday is the candy. With the huge assortment of candy, I can confidently say the worst Halloween candy is definitely candy corn.

Candy corn is a detriment to the candy business for many reasons. Candy corn is nothing but wax dipped into vanilla extract and given to poor kids during Halloween disguised as “candy.” This disgusting candy is given the alias of “corn” and made to fool poor souls into thinking it is a candied corn, which isn’t the case in the slightest. The sole fact that this abomination of a treat is sold is blasphemy.

Now that I’ve rambled on about my hatred for this candy, I have concrete proof that this isn’t an out-of the-box opinion held by just me. A study conducted by Candystore.com showed that over 40,000 people agreed that candy corn is the worst, even ranking it behind circus peanuts. Surely 40,000 people can’t all be wrong.

While eating candy, health isn’t usually in the forefront of your mind, however, candy corn should be the exception to this. In a single serving of candy corn, there are about 140 calories and 32 grams of sugar, which according to Healthline.com exceeds the daily amount of sugar recommended for women (25 grams) and is only slightly lower than the daily amount recommended for men (37.5 grams).

Sugar is not the only health issue with candy corn. Since 1955, the amount of food dye consumed by Americans has increased by more than half. Many of these food dyes have been in the center of controversy lately, even sparking public outcry to the Food and Drug Administration to ban them. At the top of this list are yellow dye 5 and yellow dye 6. These villains have been linked to cancer, among other health concerns.