Kylie Jenner held the world record for the most Instagram likes on a single post until now.

The Egg is an up and coming viral sensation that had one goal: To pass Kylie Jenner and get over 18 million likes on a picture on Instagram. The Egg passed it with ease. Within a week it already had fifteen million likes, and over one million followers. 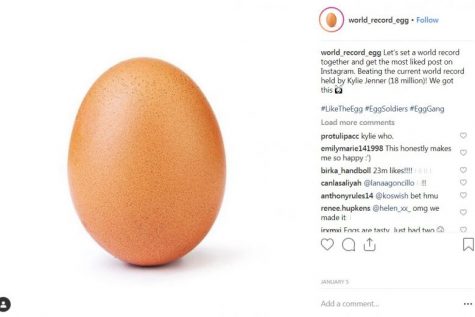 The account that posted the picture of the egg is currently worth over $250,000, and the account has sold over $5,000 worth of merchandise. The likes have continued to increase and are nearing fifty million in number.

Nobody knows who created the Egg Post, but many have claimed to be the man behind the mask. We may never know who posted the mysterious egg.

Many students at Ada High School have been intrigued by the egg’s Instagram post, including junior Canaan Miller.

“The egg is inspiring. It shows that even normal people like us can get big in the world,” said Miller.

Requests for an interview from the account responsible for the viral post have gone unanswered. All that we know is that the post has had an egg-cellent run and is still gaining likes to this day.