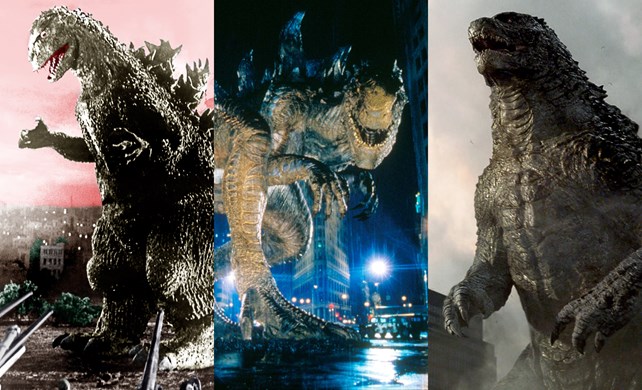 About the Writer Kelly Stillwell, Reporter

What movie lover doesn’t enjoy a good fight scene?  I know I do, and that is why I decided to start the battle to end all battles… Godzilla vs Godzilla.

The 1954  and the 2014  Godzilla movies compare and contrast with each other. Godzilla plays a major role in both the movies. However, they are not both the same the old Godzilla. In the original version, Godzilla was the villain while the remake portrays Godzilla as the hero.

The very first Godzilla (director: Ishiro Honda) movie was made in 1954 and contained a mix of raw human emotion, fantastical story, and menacing precautionary messages to help deliver one of the silver screen’s greatest films.

When I watched Godzilla, I felt that Godzilla was portrayed as the bad guy who destroyed everything in his path. Godzilla was a fire-breathing behemoth that started terrorizing Japan when an atomic bomb awakened him from his centuries-old sleep. As revenge for awakening him, he terrorized the country.

As Godzilla was attacking the city, I could tell it was a man inside the suit. When the city was being destroyed, I could tell that it was really a miniature paper city that was being destroyed. The 1954 Godzilla was pretty cool and was a well made movie for the 1950s, but the movie was more of a comedy than a horror film. Ultimately, while too old for me, the first Godzilla movie is still a very good movie for its time and will always be one of America’s favorite original monster movies.

The original movie was in black and white which started me thinking about how far this movie has come from its original black and white, Japanese language version to the remake full of color, action, stunts… and English.

The 2014 Godzilla (director: Gareth Edwards), in the world of Godzilla movies, far surpasses the others technologically. This version was made in America and uses far less Japanese that its original counterpart. The movie begins in Japan in 1999, then fast forwards 15 years later in America. The 2014 version strays from the original plot line. It is no longer an atomic bomb that woke up Godzilla.  Instead, Mutos, or parasitic spores, communicate with each other and leave Godzilla no choice but to fight to restore nature’s balance.

Even though cities were destroyed, Godzilla was the hero of this movie. Godzilla has gotten a bad rep as a villain over the years, but his contribution to defeating the Mutos in this film secures his place as one of the good guys.

For me, the new 2014 Godzilla was much better than the 1954 Godzilla. The new technology and Godzilla’s role as hero have made it my pick for winner in the Godzilla vs Godzilla battle.

However, watching both truly offers a unique opportunity to see how our technology has changed over the decades.